This is a 2 player version of Clash I had up here before the forums went down.

The map uses a new format of play. Basically, each player controls what two players would. Starting gold is 200. There are 20 villages.

I find it adds an interesting twist to the game. For one thing, unit fronts are more like 4 player games, which is to say, bigger.

Because of this, the action tends to start much sooner, since there is less unit acquiring. Overall, the influence of luck is reduced due to the increased number of troops. 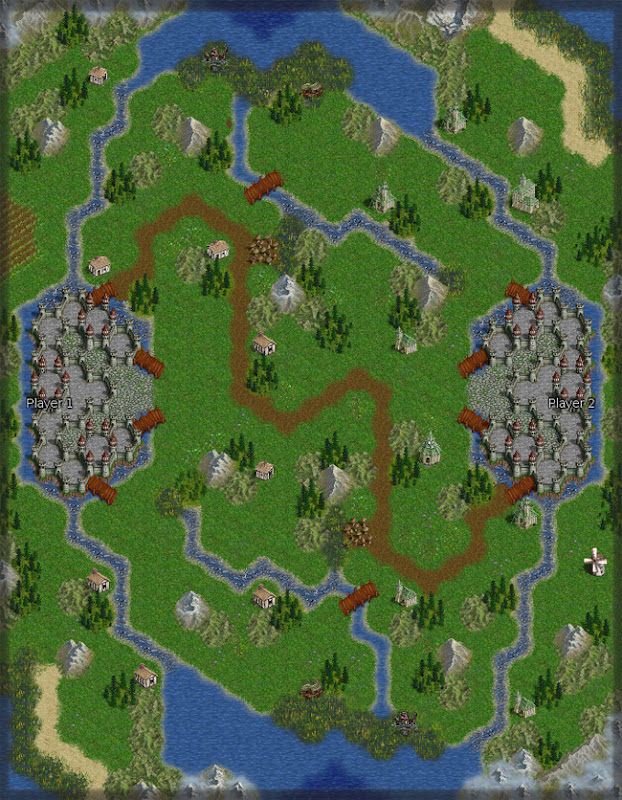 Try out the map and add comments here. I also I have a test replay with Elvenking attached of an older version of the map (0.5, I think).

I gave a quick overview of some of the issues that a 1v1 based on a 2v2 concept will face in my PM to you, but here are a few more specific things:

-P2's northern swamp village can be stolen by any P1 faction.

Both of these issues are amplified by the fact that gold is twice the normal amount, and replacement units will certainly be "in the area" right away to relieve (replace/rotate in for) a wounded village thief. The map is not so large that that unit density is not going to be very significantly higher than in any other 1v1.

-Even if P1 could not get guaranteed steals on any of P2s village, the advantage is still going to be very large for several reasons. Primarily: P2 can not use their leader very well to take the heat off of any of those highly pressurable north and south villages. They're just so far away, and not recruiting for that long in a 1v1 makes the journey kind of pointless. In a 2v2, your opponent could at least pick up the slack a little by continuing to recruit.

The map as it is creates another sort of dilemma. The terrain density is kind of low, which will give Loys a noticeable advantage in a lot of matchups. If you increase it more though, it'd be very easy to inflate the Drake advantage over most every faction, and, as I said in the PM, the Drake issue is already there because of the nature of the front (For other readers though I'll reiterate: 1v1s are often chopped into compartments for a reason, much of which is the limitation of the mobility of certain units. In a 2v2, mobility advantages are very often "watered down" by the fact that your team tends to have more answers to certain situations, being able to draw from a bigger pool of recruit options {and of course mirror matches are accordingly much more likely, leveling the playing field all the more}. In a 1v1, a wide unrestricted front like this greatly amplifies the Drakes' ability to crush a weak village area. Sometimes that extra turn that a defender gets from Drakes having to move around an obstacle is enough to give them a significantly better regional defense.....Imagine Freelands, Den of Onis, Caves of the Basilisk, Silverhead Crossing etc. etc. without impassible regions.) That's the challenge that this map faces, having a long, vertical, mostly undifferentiated front (an example of a long central vertical differentiated front would be Fallenstar Lake.)

Sulla's Ruins kind of walks that line, so you may want to study that one. A vaguely similar approach might do some good in this case; carefully adding some castle hexes to certain areas, letting other factions, particularly Undead, advance, pursue and retreat more quickly and effectively. As you do this, I'd recommend increasing the forest and hill count very slightly. This being in response to the Loy-vs.-non-Drake factions issue.

There's probably much more to say here, but I'll leave it at this for now, and we can discuss more if and after you make some adjustments.

I will not tell you my corner / where threads don't get locked because of mostly no reason /
because I don't want your hostile disease / to spread all over the world.
I prefer that corner to remain hidden /
without your noses. -Nosebane, Sorcerer Supreme
Top 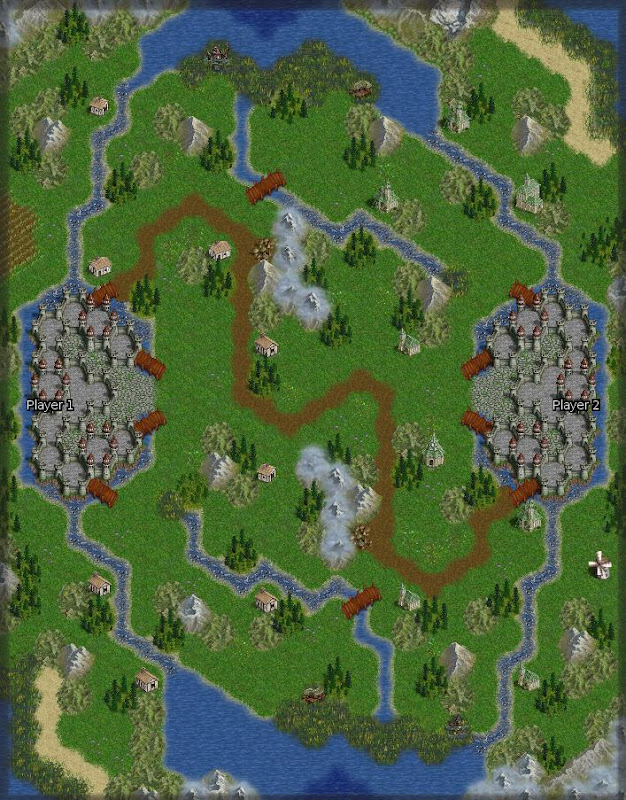 
Doc: I appreciate all your help. Good tips. Hopefully this new version solves the points that you brought up.

As a note: the comments Doc has made on this map are rather complex. Certainly of a higher-order thinking process than just 'no villages next to mountains'. One suggestion I have for you is edit the map, put it down for a bit, then come back to the ORIGINAL and try again. Make an effort to make at least moderately different changes. Then, you can post up all 3-4 results that you made with an emphasis on what you like/don't like about each one and your possible favorite. That gives Doc a lot more freedom with which to discuss the points with you.

Then again, I could just be totally wrong. Good luck!
Top

Okay, play tested this and there was not enough terrain to fight over. Here's an updated version: 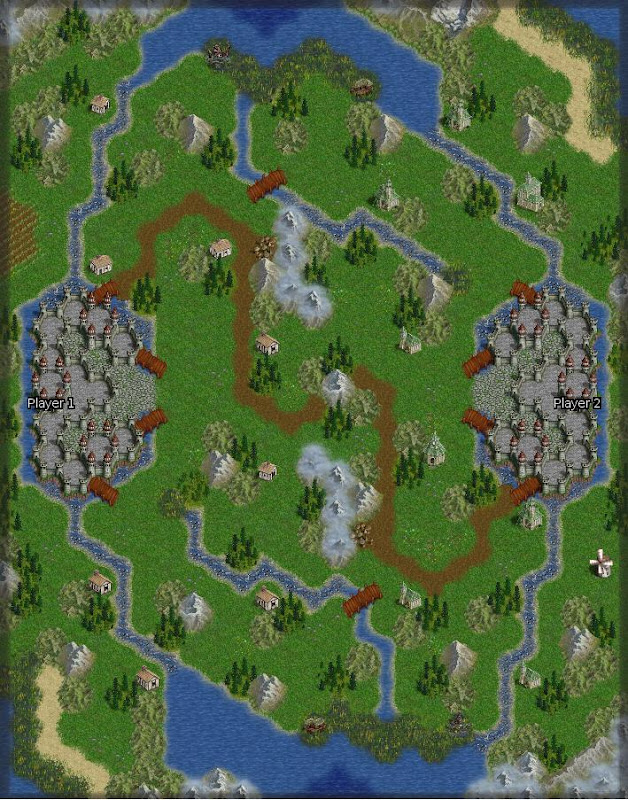 In the second one, I go straight for player 2's upper swamp village. Even though this was already pushed back, is this village in the appropriate place, or does it give player 1 an advantage?

Doesn't look like it to me. Knalgans mobility actually looks slightly superior to UD here (though not problematically so).


Deciero wrote: In the second one, I go straight for player 2's upper swamp village. Even though this was already pushed back, is this village in the appropriate place, or does it give player 1 an advantage?

That village is still a problem, because P1 still has a guaranteed steal with any faction. Count it out, and make sure that P2 can reach it in one turn less than P1. If it takes them both two turns to get there, P1 will of course get there first. If you want to keep things roughly as they are though, you could always experiment with an idea that I've been toying with....Diminish the pressure by having P1 pick up the other half of their gold on turn one with their leader (a treasure chest or something, 4 hexes from their starting location). This would very loosely imitate the 1221 pressure of a 2v2, as early P1 village thieves would risk being destroyed by a much stronger P2 counter force.

Another general thing is that it will probably be more stalematish, considering the addition (and location of) the impassables. Careful use of castle could solve a lot of the issues that I talked about in my previous post, and would allow you to open up some of those bottleneckish areas. I don't know if that would conflict with what you're going for visually and conceptually, but it's something to consider.
I will not tell you my corner / where threads don't get locked because of mostly no reason /
because I don't want your hostile disease / to spread all over the world.
I prefer that corner to remain hidden /
without your noses. -Nosebane, Sorcerer Supreme
Top

I think that is an awesome map and should be put with the new version of wesnoth. Keep up the good work, everbody!

Thank you President Bush
Ask not what wesnoth can do for you, but what you can do for wesnoth.-cobra
Top 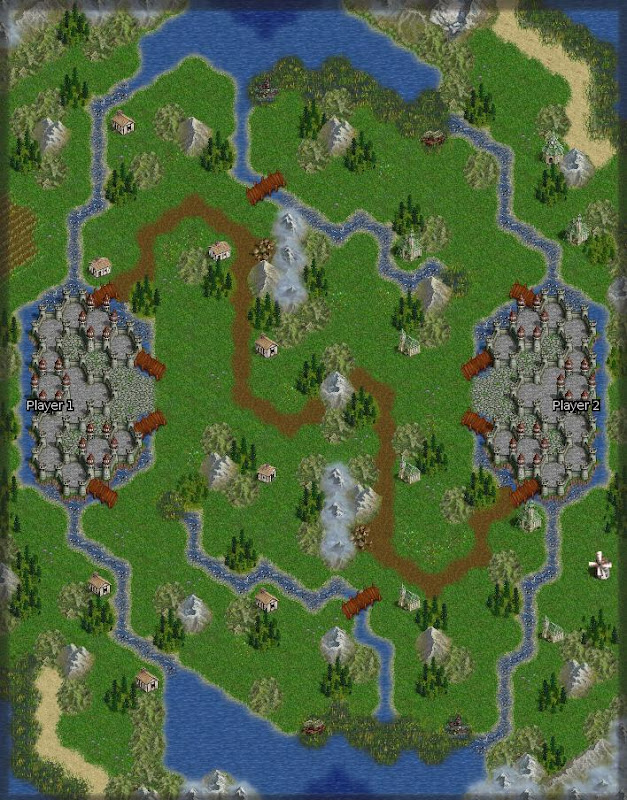 Again Doc, thank you for your valuable insight and comments.

This time around, I feel like player 2's villages are so far back as to diminish player 1's chance of holding any of them. They may be too close to player 2's base. Do you think this is so?

As for the castle tile suggestion: Would opening up the middle as I've done create less of the stalemate problem you mentioned? I'm hesitant to throw castle tiles on this and I'm not quite sure I understand how they could solve anything.

P.S. Thanks for the support cobra!

Attached below is a map test with two opponents I was able to find while I observed.

It looks as if player 1 has a very hard time coming back from his early battle loses. Is this is a map problem or is this a common outcome from losing early battles? 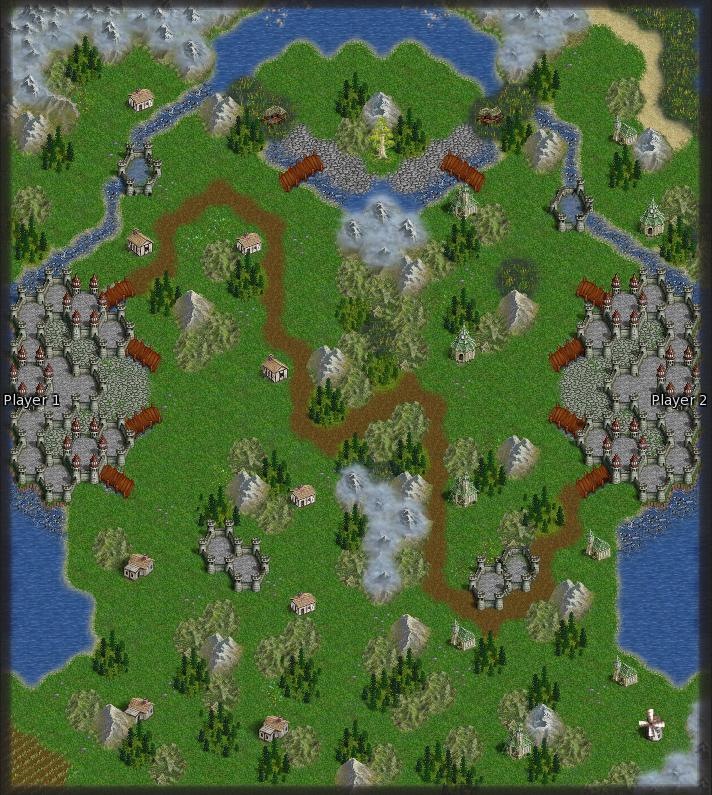 In order to resize the map as quickly as possible, I used 1.5.5's map editor. As such, the file below can only been opened with the 1.5.5 map editor and tested on with 1.5.5. When I can, I will eventually remap this tile-by-tile on 1.4.5 to make it compatible. 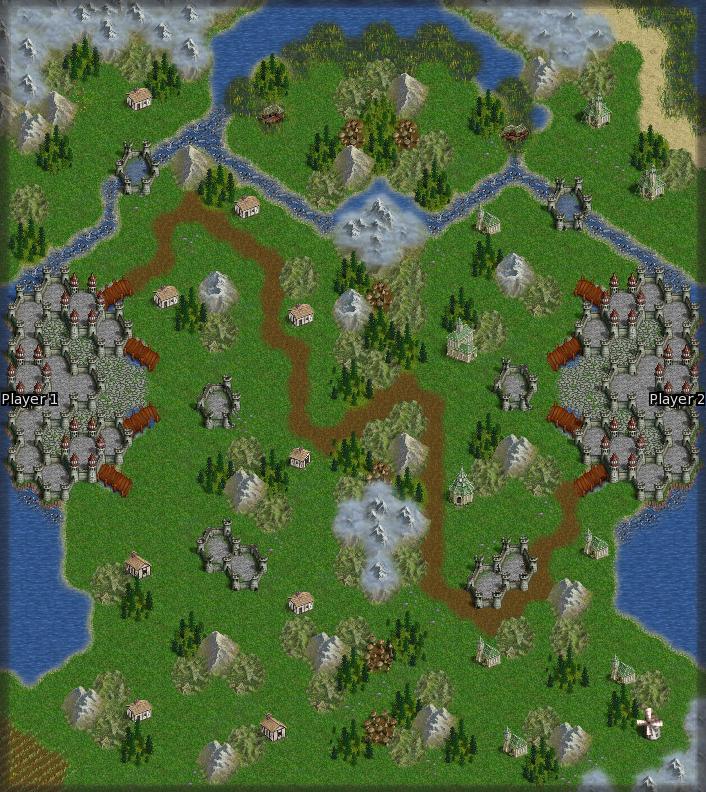 - Transferred to 1.4.5. It is now playable and viewable for 1.4.5 Wesnoth and editor.
- Added castle tile to each side.
- Redid village placement.
- Redid center terrain zones.
- Changed impassibles slightly.


Really need some feedback on this. Are there too many villages? Should there be one less? With 200 starting gold though, having 10 villages per side compensates for upkeep.

The most obvious thing I can point out in this newest version is the chokepoint up north- it'll advantage drakes, because they can easily escape non-fliers. This particularly affects loyalist vs drake and undead vs drake, because drakes can attack when preferable and leave without any consequences.

Also, player one can steal player two's southernmost village with a bat on turn two, and is only preventable by a quick elvish scout. Player two either needs the ability to kill an entrenched scout there with ease, or needs to be able to get that village on turn one.
Proud creator of 4p- Underworld. Fascinated by Multiplayer design and balance.
I am the lone revenant of the n3t clan.
Top

Thanks for the reply F8.

I think what I'm going to do is lower the amount of villages to 9 per player. This way, each one is spread out more, allowing player 2's villages to be back a bit further as well.

I am always hesitant to move player 2's villages so far back that player 1 risks too much by grabbing one. Can anyone comment on this problem? How far back is too far back?

As for the north choke point, perhaps cutting a grassland line through it like the center point would work?