You can always check the ranking of the opponent on the ladder site before you play him.

As for the naming convention, if you include the word 'ladder', anyone who would look for ladder games (either to watch or play) can find it by filtering the games by that word.
Top

When you're hosting, you could also put in the title <1600 elo (or something),
to have the higher ranked players not join the game. I think most of them read the game titles.

Strange... When I go to ladder.subversiva.org I seam to get a not found-notification. It can't be a writing error, cause I used the shortcut at page 1 of this topic to dubbelcheck, and still get the error

Am I the only one?
Top

It's also mentioned in the MOTD on the multiplayer servers.
UMC Story Images — Story images for your campaign!
Top

so, any idea where all the data went on the ladder page
"There's no love in fear." - Maynard James Keenan

Cackfiend wrote:so, any idea where all the data went on the ladder page

Earlier today reporting games didn't work and site didn't show ladder standings (exept top-10 in the main page) at all. I think Rigor was going to fix it... Hopefully all the data hasn't been deleted by mistake.

edit: It hasn't been, we just don't have access to the database. I suppose the problem will be fixed soon.
Top

Im willing to join ladder. But I cant register, there is some problem with it...
Top

We would like to start a ladder for Conquest (Minus), could we get the code?
I work on Conquest Minus • I use DFoolWide, Retro Terrain Package and the add-on 'High Contrast Water'
I moved to Nosebane's corner (Doc Paterson's signature); I am spending my time there, so PM me if I don't answer your post in forums
Top

At the moment there are two ladders for playing ranked online matches. Is it possilble to merge those ladders?
Top

Gallifax wrote:@Oook: I lost a lot of games deliberatley, I played and still play some games not very serious. I do not need a 2nd nick for that.

Why should I? Its not entirely fair I think if I had one.

Why should a 2nd nick be ok if a player is distracted? I thought the profile is supposed to show the whole spectrum of a playerprofile and not just one side and another which I convienently hide from others.

This is not simply about hurting elos system or not, its a question of character or personality. Thats why I would delete all 2nd accounts and leave them with their higher ranked accounts. I think it would be more fair.

i actually reading the whole topic And now i know that i wont have time for it. The main thing is : I Havent Found solutions.
But found some guys here that knows the value of having 1 account. The solution is not that easy I guess. Because the people that made tons of accounts wont close them. And they dont want to close these cheater accounts.. They will defend like elves in the forests. Well i have so many evidences anyway.
The problem with that is Honest ladder players are leaving the game not just the ladder.


Some ideas about solution:
Easiest Way to avoid or prevent the cheat is banning/closing accounts. But the problem is that the ladder admins dont have capacity for this i guess.. Or they didnt find didnt agree how to solve this multi-account problem. Cheating is not stopped. They wasting our time and making us (the honest players) angry. Simpliest way is Immdediately ban. Because they wont finish their business.

The thing is clear:
A Cheater need those accounts to pump points into other cheaters s account, and these accounts will pump the cheater. Seems like a good deal for the scammers isnt it ?? And an easy way to break the 1800 or the 2000 whatever...
There are other type of cheaters :
Cheater are doing the point scamming for fun and beating someone with 1300 or 1400-1600 ponts (while having an account with 2000points). In that type you cant follow the whole thing. You will never see them throwing away the points.

The problem is now the chaters are everywhere.. They can t make points over 2000, So they went down to 1800 ..
then they went down to the 1600 border.. and so on . Never ending sh-t. And the ladder admins think the problem is "HIDING " only over 2000 points. I mean They think only the high ranked losers using many accounts.
MAze

Seasonality:
1 ) The ladder was most active in the years 2011-2013, and it was my pleasure to serve you, the community, as ladder admin during that time.
2 ) February was an excellent time for games, while September (followed by August) was the biggest downtime.
3 ) Weekends saw the most ladder games, while mid-week was generally lower.

Metadata:
4 ) The default era, as well as the rby ladder map packs were the most popular eras to play ladder games. Perhaps a third of the players enjoyed not having to fight out a mirror.
5 ) The most active version was 1.10
6 ) Cyan is a popular color choice. Blue is quite dark on the minimap, but still surprising when you consider red and blue are the default colors.

In-game:
7 ) The faction that was most popular were loyalists, followed by a close race between elves and orcs.
8 ) The most frequent turn outcome was 12 turns. 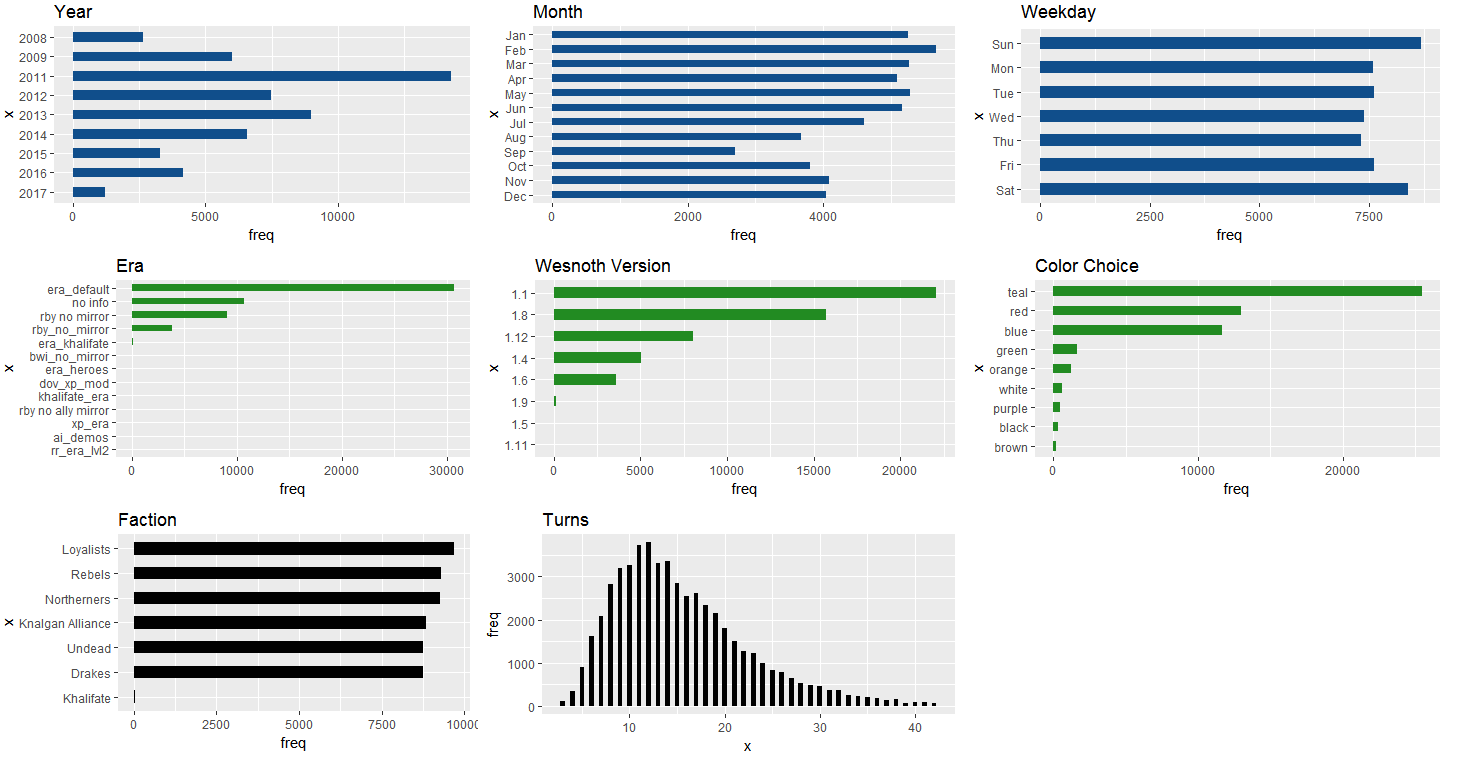 9 ) The most active ladder player with the highest submission of games in the measured time period measured was: Bonobo, followed by GaretJax and Fanjo. Congrats! 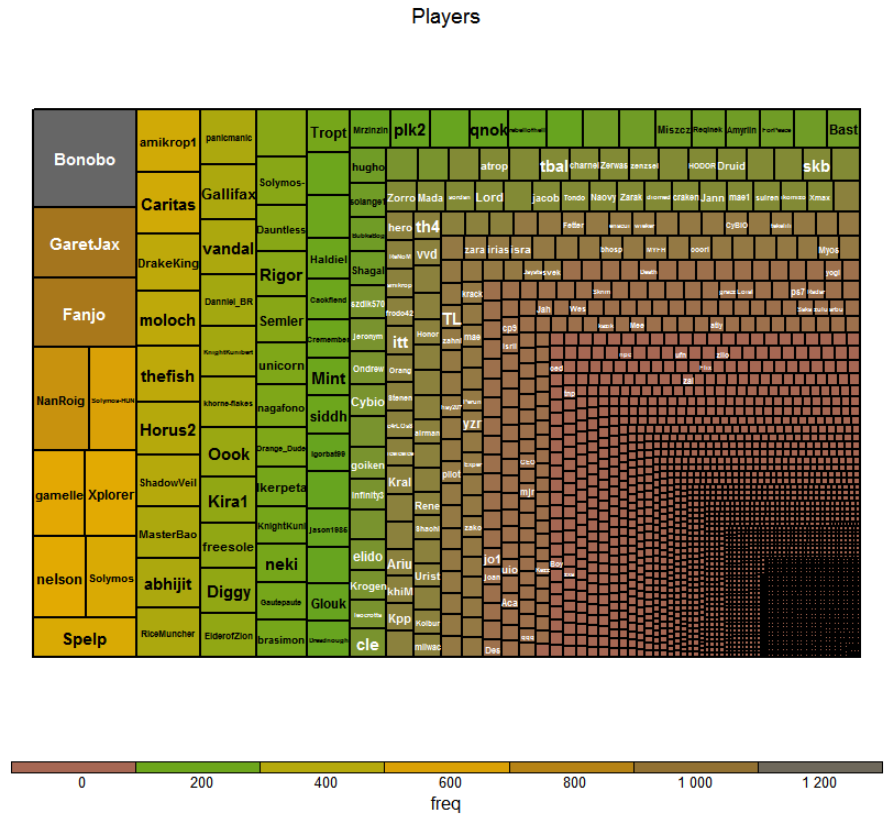 10 ) And the most played map is ... (without revised map versions): Weldyn Channel, Freelands and CotB. But we all know that the revisions are minor and actually Freelands takes the prime position, followed by Weldyn and CotB. Let's just keep in mind the experience is not entirely the same throughout different major versions of the game. 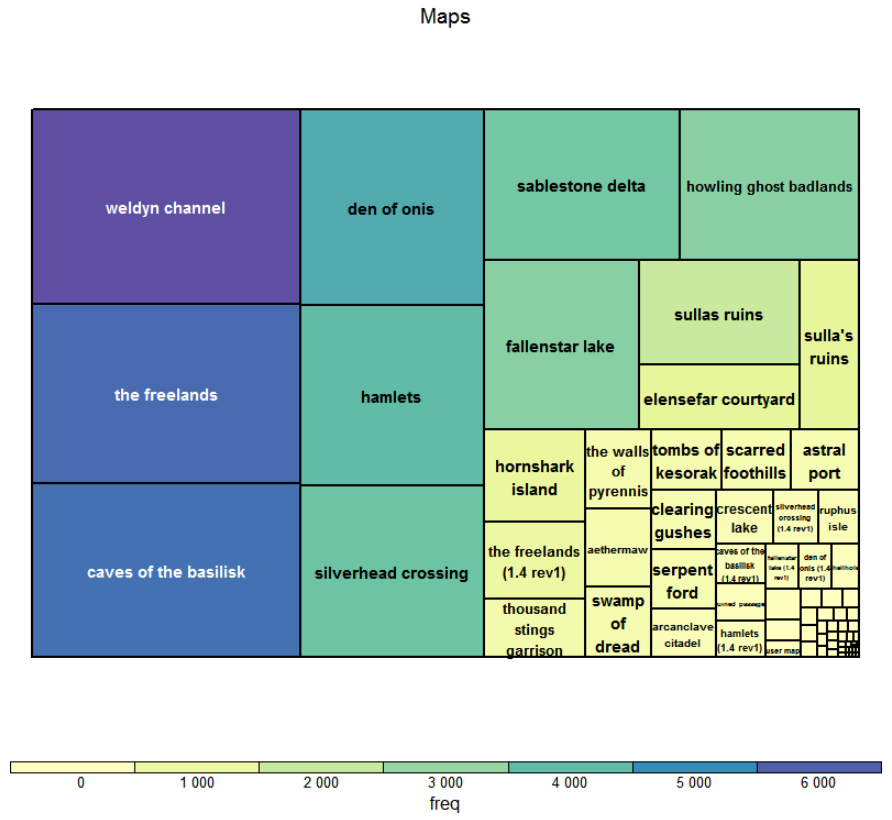 11 ) Wesnoth's faction leaders are a source of the game's tactical diversity. And the most played leaders are: Dark Sorcerer, Red Mage, and Lieutenant. Let us also mention the rest of the Top 10 pack: Dwarvish Steelclad, White Mage, Orcish Warrior, Deathblade, Drake Flare, Rogue, and Bone Shooter. That means around a third are undead and loyalist leaders. It will be hard to see the small numbers, but allow me to read the other end of the spectrum for you before the numbers trail off <10: Drake Slasher (243), Drake Gladiator (233), Necrophage (129), Elder Wose (39), Shock Trooper (17). 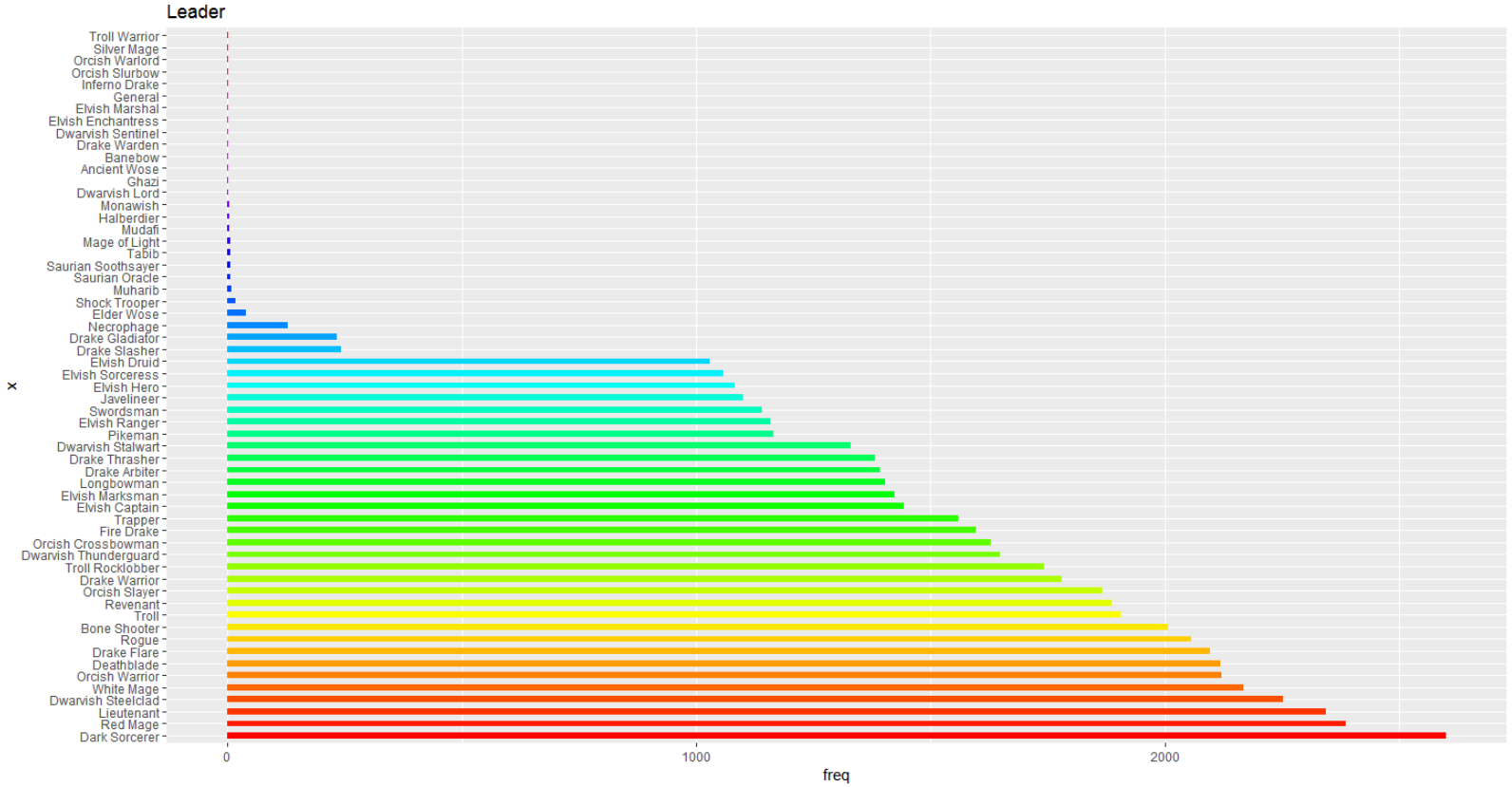 12 ) If you really want to know, the raw data structure looks as follows:

i only wonder how did u collect all this information;)
Top

Great Job Rigor, and thanks for taking the time for this statistical analysis. This would surely be useful in future efforts to balance stuff, and also its fun.

Maybe I'm going to hard pick HI leader now. Any chance that you could extract "Random" picks? I think that is actually the most popular faction/ leader choice. You should have also mentioned that some outcomes don't appear in the Random, hence why some leaders have quite a jump from those that appear in Random.

LOL at Khalifate era picks. I wonder if those results will be purged.
Top
Post Reply
1220 posts